Head of the Journalism Department Pippa Green's thoughts on the launch of The Mamelodi Voice.

Mamelodi is one of the oldest townships in Pretoria, but it gets little local media coverage unless it is about crime, or about protests or about disasters. Yet it is a community rich in history and heritage with a present that brims with vitality and diversity.

We have found there, a host of community projects, the result of co-operation between the community, civil society, foreign embassies, international and local students and UP's own Mamaledi campus.
We hope this newspaper will help establish a stronger voice for both the community and the project workers who work so hard there, mostly out of sight.

Our heartfelt thanks go to Mr Edwin Smith, director of the Mamelodi campus, to Ms Helen Smith, South African representative of the Mamelodi Trust. to the community project workers and volunteers, and to the people of Mamelodi themselves for making this project possible.

We are proud of the entire second year class, who embarked on this story-telling venture with enthusiasm and commitment, and particularly of the dedicated editorial team who put this newspaper together.
Posted by The Mamelodi Voice at 07:38

Email ThisBlogThis!Share to TwitterShare to FacebookShare to Pinterest
Labels: How It All Started, Mamelodi Voice, University of Pretoria

Read previous editions of The Mamelodi Voice below: 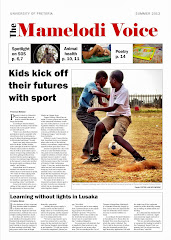 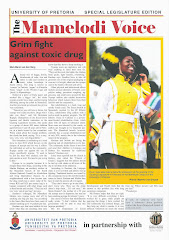 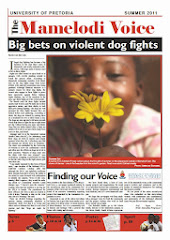 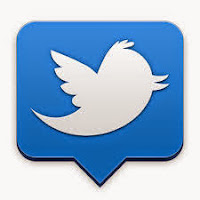